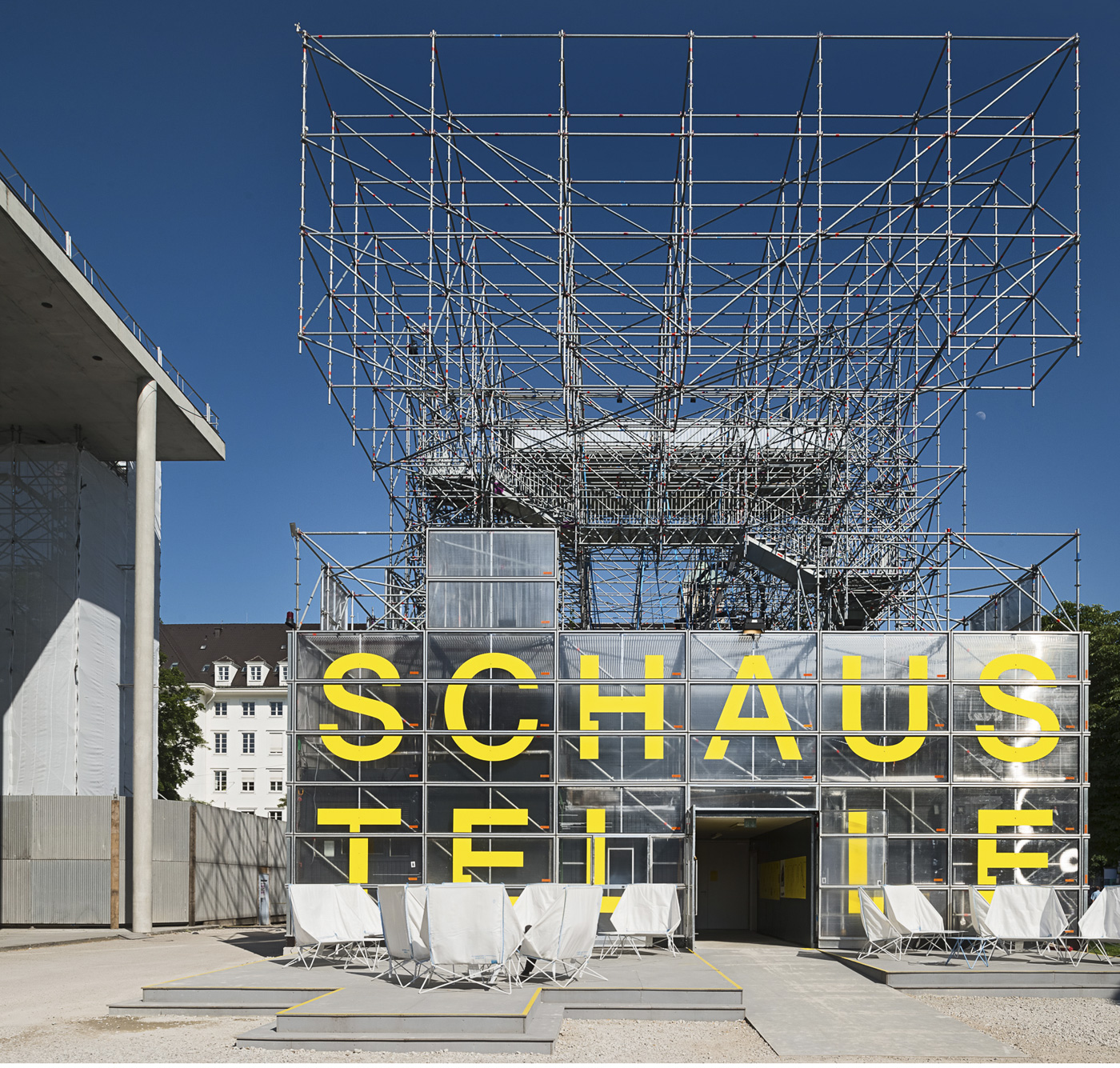 The temporary building designed by Jürgen Mayer H. is a tall, and in sections cantilevered, open-scaffold structure constructed from reusable modular scaffold components, with the overall dimensions: floor interior approx. 250 m2, first-floor terrace approx. 150 m2, and a viewing platform 17 metres off the ground. The bulk of the structural elements (including the service container and the façade’s plastic panelling) can be put to further use in the construction industry once the SCHAUSTELLE has been dismantled. As a result, material wastage is reduced to a minimum. This underlying concept of sufficiency, flexibility, and reduction to the simplest of means encapsulates the overall, pervading ethos of the SCHAUSTELLE.
Various forms of temporary exhibition spaces have already been put to the test in other cities. They include London’s Serpentine Gallery, which changes from year to year, the Aue Pavillon for the documenta in Kassel, designed by Lacaton & Vassal, and Adolf Krischanitz’s Temporäre Kunsthalle on the vacant Schlossplatz in Berlin. Notably, in Berlin in particular new temporary gallery formats pop up again and again. It is, however, unusual for a national museum to give wholehearted backing to such a temporary exhibition concept.
Planned for Berlin, implemented in Munich: the SCHAUSTELLE, Jürgen Mayer H.’s feat of structural engineering, was originally devised as a temporary art space to be erected in Humboldthafen in Berlin, in the middle of a residential and commercial area. That project aimed to strengthen the locality’s general appeal as well as provide an additional cultural venue to the city. However, not one of the more than twenty submitted proposals ever came to fruition. One key reason for this was that the planned contents for the art space, which the Wowereit administration envisaged as a ‘showcase for young art from Berlin’, resulted in protests and threatened boycotts from the local art world. This is precisely what the SCHAUSTELLE does not want to be: a product showroom advertising the local output of the artistic, architectural, and cultural economy. The SCHAUSTELLE instead aims to be an open forum for multidisciplinary topics, a place to raise and explore universal questions that highlight the range of tasks and opportunities faced by the museum of the 21st century.